・ The genuine successor for CUY21EDIT, which is the best in vivo electroporator

・ CUY21EDIT II is the true electroporator, which two power units suitable for in vivo and in vitro respectively

・ Constant current pulses is the best for GONAD as well as in vivo electroporation.

・All data of executed voltage and current of generated pulses are recorded.

・ The pulse records is exported to a USB memory

Every pattern of pulses

CUY21EDIT II can change the polarity of the square pulses alternately. 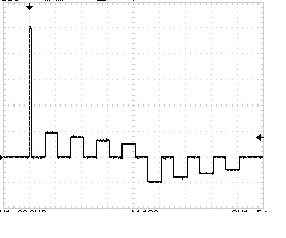 CUY21EDIT II generates dual pulses with square pulses and can change the decay rate of the voltage.

CUY21EDIT II can change the polarity of the decaying Driving Pulses in Dual pulse mode alternately. The convert of the capacitance of the condenser enable decay rate to be changed.

CUY21EDIT II can alse change the polarity of the square Driving Pulses in Dual pulse mode alternately.  The decay rate can be changed.

5.7-inch touch panel for easy use 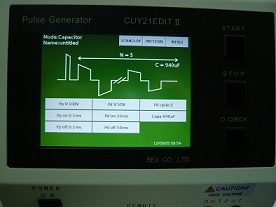 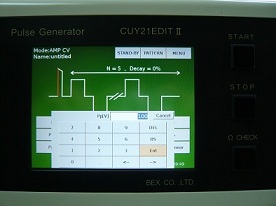 CUY21EDIT II is the first electroporator to generate constant current pulses. In electroporation, the key to success is current which is running between the sample. Previous electroporators, however, set only voltage value and can't set current running between the sample. BEX previously equipped all BEX electroporators with the function to measure the impedance, so that the user can calculate the current by the set voltage and measured impedance. Now, CUY21EDIT II initialy can set current values to release the user from the calculation of the current value by the voltage and the impedance.

Pulse data is exported to a USB memory.

CUY21EDIT II exports all data of generated pulses to a USB memory. It is not necessary to make a note for electroporation data. You can use digital data in your PC.

A lot of application

All data of executed voltage and current pulses are recorded.

CUY21EDIT II records all data of executed volatege and current. It is not necessary to make a note of values of each electroporation. This function makes the experiments more efficient. CUY21EDIT II displays the executed parameter and can generate the same parameter as the displayed parameter. 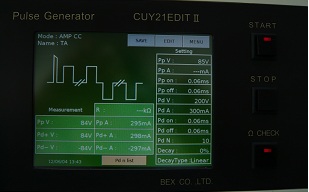 'History' display to track the parameter. CUY21EDIT II can generate this parameter in this display.

※The spec and appearance of the product(s) above can be changed for improvement without notice.